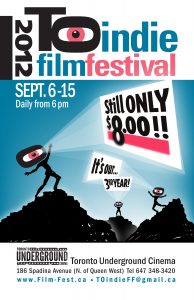 Here’s the winners for the 2012 Toronto Indie.

All films were screened at the Toronto Underground Cinema
See below for the full line-up.
Winners 2012

All films are screened at the Toronto Underground Cinema

Todd runs into his ex-girlfriend, literally, with his car. Not seriously injured they begin a date. Until all hell breaks loose. Detroit can be a very dangerous place in the winter.

To beat a drug rap, Harris Reynolds joins a christian youth mission in Berlin. Living with a group of committed young Christians in the sea of temptation that is modern Berlin is a tough row for Harris to hoe. But he knows that if he does not maintain absolute discipline, several years in the D.C. pen await him.

A Holocaust documentary about the heroic deeds of a Ukrainian woman, widow, mother of three small children, who, while trying to save her Jewish neighbours, herself fell victim to the Nazis.

Broadway’s Finest is a diverting story about three struggling men who impersonate New York City undercover cops and chase down a notorious drug dealer to get the authentic material they need to create their own cutting edge police drama.

Marcus, a young English teacher from a quiet New England town is in love with Gabby. When a devastating accident nearly kills her and renders her in a vegetative state, Marcus must made some very difficult life decisions.

A psych-patient, accused of a violent murder, turns to her court-appointed psychiatrist to prove her innocence and sanity. Her psychiatrist must help her decipher delusion from truth to unravel the mystery of her reality. This fast-paced thriller will keep you guessing until the very end.

After realizing that most of Manhattan today is less about art and culture and more about money and corruption, Marty decides to take a chance and move uptown to Harlem, NYC. Once there, he finds a hilarious adventure of friendship, love and community enveloped in music, dance, grit featuring one of the most unique neighborhoods on the planet. Once there, Marty quickly learns that Harlem is not quite what he expected…

It is summer, Alex is out of work and does not know what to do with herself. After an awkward moment in a bar with friends, she decides to drive non-stop to see her cousin Jesse in Georgia. The two reunite after years apart and they decide to go on a trip through the southern U.S.A. They don’t know where they are going, but they are about to discover their own path.

Terry surprises her estranged family by showing up on her birthday, to inform them of her plans to marry Alex in one week. The surprise is on Terry, though, when she meets the half sister she never knew existed.

In an institution for troubled girls, Zoe, an angry delinquent, is forced to share a room with silent Jehanne, a girl who lives as a saint in a world of her own devising. Hostile at first, an uneasy truce is struck in the face of a common enemy. As their friendship grows the wall between this world and that of Jehanne’s fantasies begins to thin, revealing to Zoe a beautiful escape.

Director Matthew Lancit quit his day job to travel across Cameroon, visiting some of the world’s most joyous funeral celebrations. Throughout his excursion in the foreign countryside, Lancit is taken with the locals’ belief that the dead are still roaming the Earth, leading Lancit himself to experience what might be a spiritual connection with his own ancestors. Ultimately, Lancit learns about an altogether new way to celebrate the dead, their memory, and the ways in which they still affect and even interact in our lives.

A unique story of friendship that rises and falls with the rich diversity of Canada’s changing landscape. GODART follows the journey of two young men who meet as strangers on the east coast and decide to hitchhike west.

Material Success chronicles the misadventures of the eccentric designer Bruno Ierullo preparing for his first fashion show after tragedy inspires him to put his life savings on the line to make a mid-life career change into the world of fashion. Featuring over 300 hand-made garments of kaleidoscopic colour and the unbridled ideologies of Bruno’s new life and artistry.

South Dakota 1899 – When a mysterious stranger, Henry Seed, visits a small town on the outskirts of the Lakota Pine Ridge Reservation he brings with him a terrible resolve. When eerie, inexplicable and deadly events that mirror the atrocities that had been put upon the Lakota people begin to occur in this western town, everything seems to point to Seed. Little Thunder, the Lakota’s spiritual leader, envisions the far-reaching consequences of taking this path of righteous revenge or maintaining the integrity of the traditional Lakota values and the interconnected circles of all mankind.

The film explores the impacts of gold mining, one of the most lucrative industries in the world. The film gives an intimate look into the lives of native populations in Peru, their customs and traditions currently being threatened by the world’s intense demand for gold. The film also looks at the impact of gold mining on the social, economic and political life of the country.

An intense personal adventure with universal themes that just happens to feature on of 20th-century music’s greatest icons, ‘My Father and The Man In Black’ presents the untold story of ‘bad boy’ Johnny Cash, his talented but troubled manager, Saul Holiff, and a son searching for clues to his father’s suicide in the shadow of a legend. Before there was Johnny and June, there was Johnny and Saul.

Julie Wagner has everything today’s young woman thinks she wants. But when a prickly but brilliant composer-musician knocks on her door with an odd request, Julie ushers in a series of events that will bring her in contact with her buried hopes and fears, and force her to make choices she couldn’t have fathomed.

Desperate to meet a career-saving deadline and escape the distractions of his troubled life, screenwriter Jack arranges to be locked inside a meat cooler, with only vegetarian meals and his imagination to inspire him. As the temperature drops, the lines between reality and fiction blur, and Jack’s script comes dangerously to life.

Michelle is turning 50. A time to set aside youthful dreams. Or is it? Michelle, Olivia and Lizzie—separated by time and distance—reunite in London. Life hasn’t gone to plan for any of them. Is it too late to start over? Make a fresh start? Each has a dream and a personal quest. But they can’t succeed on their own. It takes an entire community. But it starts with the power of three.

Inspired by a true story, “Transatlantic Coffee” is a tale of boy meets girl, boy falls in love with girl …only the boy is a 41 year old clown, the girl, a teenage stripper from London. Alex is battling bleak circumstances within his version of a hostile world. However, his outlook evolves with the emergence of the young, sharp and adventurous, Mandie. The oddball duo embrace each other for who they are, until Alex’s secret trauma bubbles to the surface, leaving for a climax that should not be missed.